I love a good BBQ pulled pork sandwich. We like our pulled pork not overly-saturated in BBQ sauce. For cooking, I think the crockpot is the best method, so a little prior-planning is required.

First, the cut of meat – use what’s called a “Boston Butt”, which is actually a cut of pork that comes from the upper part of the shoulder from the front leg and may contain the blade bone. Look for one that is 4-7 pounds. This will make a nice big pot of pulled pork; the meat does shrink during the cooking process. The number of servings will depend upon the size of the sandwiches, of course, but you can easily feed 8-10 people with something like this, probably more.

Some people like to trim some of the fat from the meat before putting on a dry rub, but I like to leave the fat on during the cooking process for extra flavor and juiciness in the finished dish, and remove it while I’m shredding the meat.

I used a butt that was on the smaller side for my most recent batch – this is a 4 pounder:

I always rinse bigger cuts of meat when I remove packaging, and then pat them dry. Never know what lingers on the meat from the packaging process! Then I apply a dry rub. Ideally you can leave this on for several hours, but the meat will cook for several hours too so all the flavors will be there even if you can’t. I usually put the rub on the meat the night before, let it do its thing in the refrigerator overnight, then put the meat into the crockpot the next morning.

My rub (recipe below) has a lot of ingredients because we have a well-stocked spice and herb cabinet, but you can get by with fewer ingredients and it will still be delicious:

Mix the rub and apply it to the meat. Really rub it in there, all over, even on the side with more fat. Don’t be stingy! My recipe makes plenty of rub, but on a bigger cut of meat I’d likely use it all. These days you can find many already-prepared rubs too, if that’s the way you want to go.

Put your meat in the refrigerator for several hours, if you can, but if not you’ll still be pleased with the outcome – I promise. If you are going to let it sit overnight in the refrigerator, just put it into a baking dish and cover it with plastic wrap.

When it’s ready to go into the crockpot, I first layer some diced onion as a bed for the meat to sit on. It keeps it off of the direct heat and the onions flavor the resulting liquid; also, I keep the onions for use in the pulled pork (though I later add a bit of fresh minced onion too). So just dice up a medium onion and throw it into the crockpot, then place the meat FAT SIDE UP onto the onions. No liquid is necessary, as you’ll see – in fact, when you remove the meat to shred it you’ll need to remove a good bit of liquid.

I haven’t talked about the BBQ sauce yet; you can certainly make a good homemade one, but there are a lot of great bottled BBQ sauces in stores, so I usually just use one of those. If you want to make homemade sauce, you’ll want to use some of the drippings that come off of the cooked meat. Put the lid on and turn the crockpot on; for how long, of course, depends on the size of your meat and whether you’re cooking on low or high heat. If you’re putting it on earlier in the morning and eating it for dinner, low heat will be fine – 9 to 10 hours on low should do it. On high, it’ll probably be done in 6-8 hours, again depending on the size. You’ll know when it is done by the fact that it will shred easily when you use a fork on it.

Once the meat is done, transfer it to a dish or pan for shredding. The easiest way is to take 2 forks and start pulling the meat apart, removing any big chunks of fat and, of course, the blade bone. Strain the liquid from the crockpot, reserving those onions, and put the meat, cooked onions, and a cup or so of the cooking liquid back in with the meat. At this point, you can add your BBQ sauce. Again, how much depends upon how saucy you like your pulled pork, but I think not overdoing it is key; let the flavor of the meat shine, complemented by the BBQ flavor. You’ll probably use 2 cups or so of sauce, depending upon your taste. At this point, I like to add in a small finely minced onion and some fresh minced garlic too. Stir everything together and let it cook for another hour or so:

The only thing left is to serve and enjoy! Many people like to put some coleslaw on their shredded BBQ pork sandwiches; that’s delicious too. 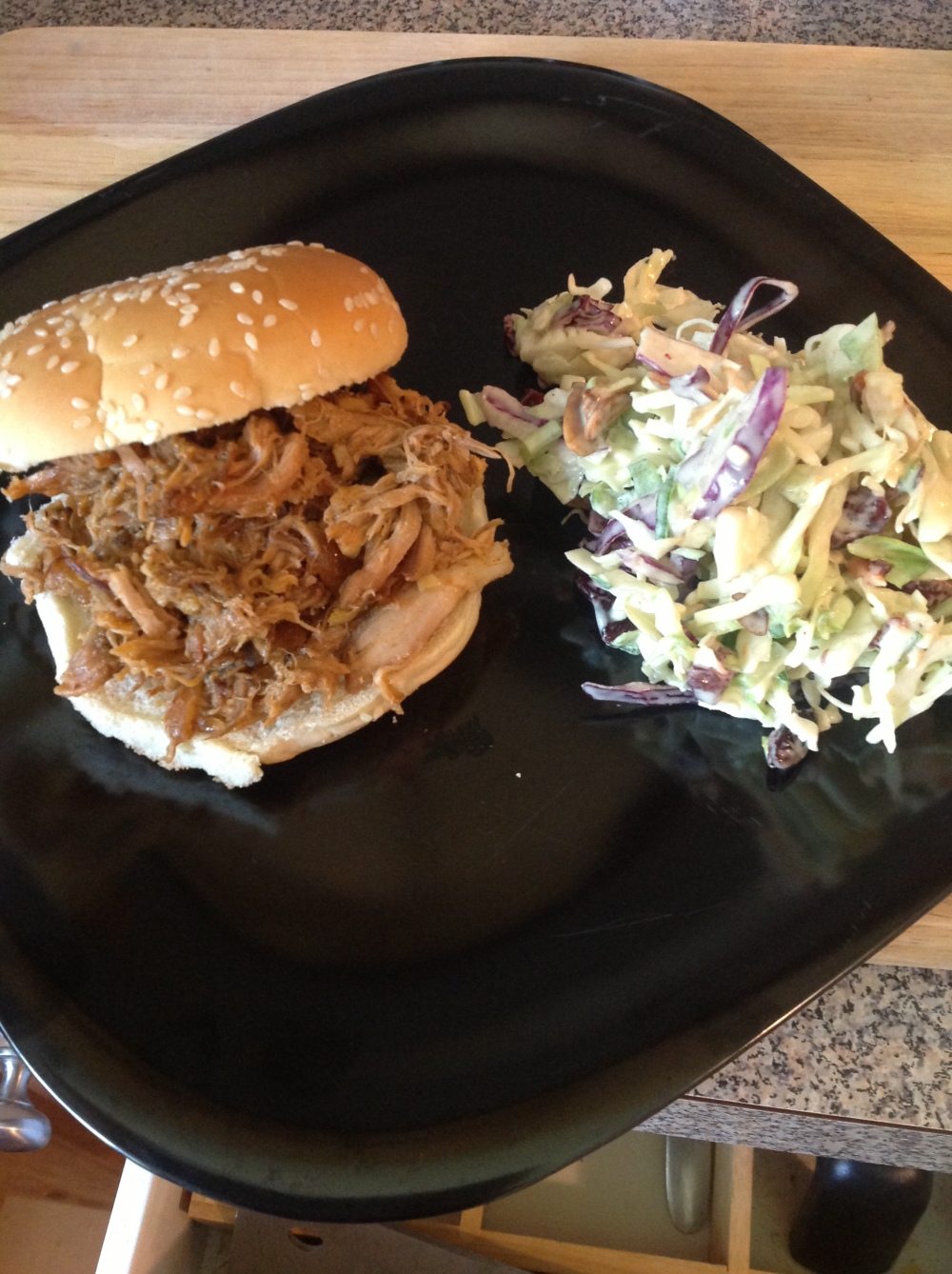 Here is my rub recipe: